One is best known for Cubist paintings, the other for kinetic sculptures. One grew up in 19th century Spain. The other spent his childhood in turn-of-the-century America. One spoke little English, the other spoke almost no Spanish and allegedly not great French. A seventeen-year age gap separated the two. They seldom ever met. And yet, there are a striking number of similarities between two of the best-known names in 20th-century art, whose paths briefly crossed in Paris in 1931, and whose works come together now in a new exhibition at the Musée National Picasso-Paris this spring, Calder-Picasso.

In many ways, Pablo Picasso and Alexander Calder shared almost parallel lives. Both came from artistic families, who moved long distances across their respective homelands during the artists’ early years. Both grew up in predominantly urban environments, and both experienced poignant fractures in their childhoods when close family members contracted debilitating, and tragically in the case of Picasso’s sister, ultimately terminal respiratory illnesses. Professionally, both were multifaceted artists, embracing fine art, printmaking, sculpture, jewellery, stage and set design, as well as, writing and mechanical engineering. Both were drawn to Paris and ultimately made their homes and set up practices there.

It is, therefore, perhaps not so surprising that the two shared commonalities in their thinking and their approach to art.

Calder and Picasso had a mutual friend in Joan Miró, but the first time the two appear to have been in the same room together was at a private view of Calder’s first abstracts exhibition at the Galerie Percier. The peak of their professional crossover, however, came some six years later at the Spanish Pavilion during the World Fair in Paris, where Picasso presented Guernica, and Calder displayed Mercury Fountain.

A further fifty-so years later, Picasso and Calder’s grandsons met in New York. As with Messrs Picasso and Calder Senior, the two claim they did not instantly hit it off, but when they serendipitously spotted a likeness between Picasso’s Portrait of a Bearded Man (1964), a self-portrait assembled from colourful lines, and Calder’s Untitled (c. 1942), a kinetic sculpture using the very same colour palette as Picasso’s painting, the pair began to collaborate to bring the dialogue of their grandfathers’ art to the public. 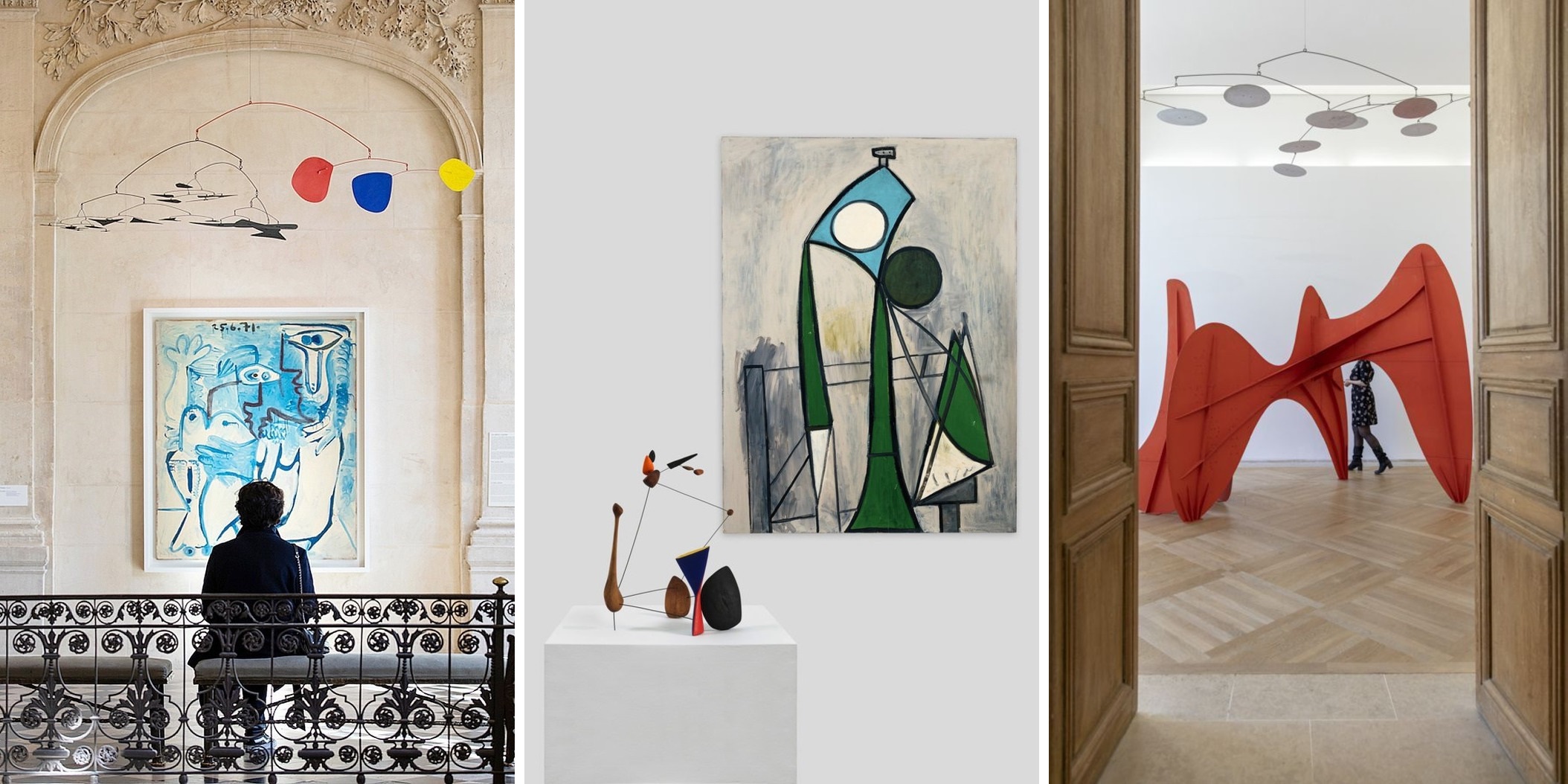 Calder’s scientific background doubtless gave him his preoccupation with ‘Space’. He said that “the underlying sense of form in [his] work [was] the system of the universe, or part thereof. For that is a rather large model to work from”. His grandson, Alexander Rower, who helped conceive of the current exhibition, explains, “he began this language of drawing in space, which is a term first used for Calder, and later used for Picasso”.

"When I do not have any blue, I use red" - Pablo Picasso

“I love red so much, I almost want to paint everything red.” - Alexander Calder

Likewise, Picasso developed a fascination with space in all senses. In an interview with Architectural Digest, his grandson and the exhibit’s other co-creator, Bernard Ruiz-Picasso, comments that “the show turns on Picasso’s and Calder’s mutual doings with the void…showing us that we are actually partners in its creation.”

Perhaps fittingly for the Bauhaus’ centenary year, the exhibition, showcasing the two titans of artistic geometry, primary colours, form and space, displays over 120 works in chronological order over two floors of the Picasso Museum and Diego Giacometti’s lighting fixtures, originally commissioned for the museum’s opening in 1985, have been replaced for the show, with Calder’s mobiles.

The  Musée National Picasso-Paris' Calder-Picasso exhibition will be running until the 25 August.

In the meantime, why not explore The Conran Shop's collection of Picasso-inspired cushions and original lithograph prints?